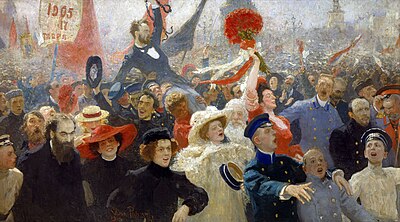 October seems to have a special place in Russian history. I have a theory about it. I think there are only two months you have to be concerned about—August and October. The rest is not a problem. Think about it!

August is when the leaders take vacation, and those who don’t might think it is a good time to move into the empty offices. That is what happened to Gorbachev in August 1991. It is also the time, as on weekends, that demonstrators (by definition those who don’t have dachas) can be gathered in the largest numbers for maximum effect against those who do have dachas. But things may not get delivered on time, like flags and banners, or picks and crowbars, in which case it may be October before everyone gets their act together. (The 1905, 1917, 1993 revolutions)

After October, it gets cold, and it’s no fun marching in the cold rain and snow. December is too cold and the New Year and Christmas are coming.  January is the time to get drunk. In February, the snow is too deep and still too cold for action. March is too muddy. April and May—now who would want to start a revolution in the quiet and beauty of an idyllic Russian spring? Anything requiring thought and action can wait.

June – the most magical time of the year in Russia. Days last forever so there is no night left for conspiring, and who wants to disturb the peace anyway? It is time to lie in the grass with your girlfriend and count the clouds. But then those with evil thoughts feel the frustration, as they know the days soon will shorten, and they feel the itch of dissatisfaction. The depressing heat and dust of July ratchets their nerves. Impatience amplifies their indecision into chaos and they are ready to strike. August is the time.

But August is a hard time to get anything done in Russia. Trips to the Crimea, or to Europe or Turkey today can interfere with revolutionary schemes. Politicians are not in one place so you can shoot them. So when everyone has drifted back to Moscow, surreptitious meetings can be held in September and grand plans can be concocted. With winter threatening, October is the last possible time. So October it is.