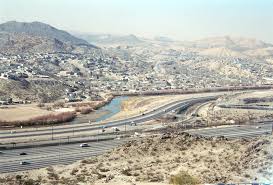 Spain searched for “Cibola”, the Seven Cities of Gold and never found them. But from late 16th century they kept traveling up the Rio Grande River, through El Paso del Norte, the pass through the foothills of the Rockies, all in the name of Roman Catholicism, and gold. So the two cities, Juarez and El Paso, like sisters, grew at that pass.

But, today, it struck me as if the sisters were always orphans. Juarez is too far from Mexico City, even Ciudad Chihuahua; and El Paso is too far from the center of Texas, like Dallas and Austin. Their “parents ” don’t really know them.  And like orphans who have grow up divided by “the tracks,” actually that shallow and narrow river, one in a middle class working family and the other in distressed barrio of crime and poverty, they are far apart, but still sisters.

Having been born and raised in El Paso, it is a sad feeling to see my home, El Paso, called the 2nd safest city in America and its sister city Juarez, called the most dangerous city in the world today.  There are articles asking if Mexico can survive. If Americans were not buying the drugs and supplying much of the guns, there would not be the problem. Something to think about. What is our responsibility?