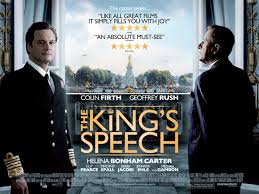 What an incredible theatrical experience! I have seen it twice, now, and am so glad I did. The main story, based on the true story of King George VI, is a miracle enough.  How the Duke of York (Colin Firth), the second son of King George V, rose above a life-long mental condition, a debilitating speech impediment to take the crown of England as King George VI and lead his people into standing up to Adolf Hitler in World War II was an world changing historical event. I am so glad is being so dramatically retold. And dramatic it was.

And it would not have happened without the Australian speech therapist, Lionel Logue (Geoffrey Rush.)  After a rough start, the two delve into an unorthodox course of treatment and eventually form an unbreakable bond. With the support of Logue, his family, his government and Winston Churchill (Timothy Spall), the King overcomes his debilitating stammer and delivers a radio-address that inspires his people and unites them to confront the horror of the war. The catalyst in this is his wife, Elizabeth (Helena Bonham Carter), the future Queen Mother, who arranged for her husband to see LogueOn the second viewing, I realized there were many stories within the main story. I better noticed the faces that told so much. And the score, especially the allegretto from Beethoven Seventh Symphony (a favorite of mine) was so moving as back-ground to his famous speech. To those of us who lived during the War years as school children, it was an exciting and welcome historical refreshment. I might see it the third time.