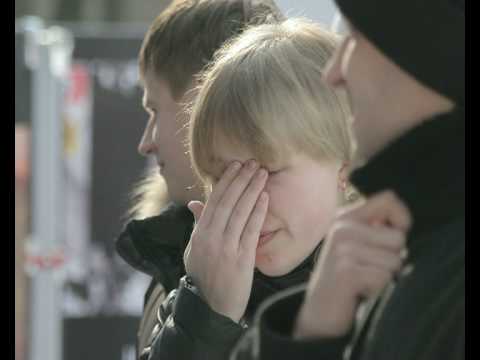 This is the Part 4 of my weekly series about Russian women.  It’s about those I call the “Barbies” and the “beaten.”

There is another kind of woman in Russia today, which, unfortunately, is nothing to brag about–the Barbies. Out of the same age group of the young Russians who are so promising, there are the Lady Gaga wannabes with more on their face than in their head. The Barbies sit dumbly in the street kiosks, bored, chewing gum, reluctantly responding to questions about the pirated DVDs on display. With a cigarette hanging from over-painted lips, they are lost in a cheap world of making money, conspicuous consumption, and Hollywood B flicks. Down Nevsky Prospect, they walk as onto a couture stage, the teen-aged bare-bellied Barbies, arm and arm, lost in their cheap fantasy of who they want to be. We have them, too. They are not the hope of the new Russia–but maybe will get in line with the winners.

One kind of woman in Russia, one too often obscured, is the tragic–the beaten. She is the victim of the violent side of Russian culture, the deep-seated crudeness and cruelty present in many Russian men. The Moscow Times reported once that fifty percent of all murders are committed by husbands killing wives. Rapes, not as prevalent as in America, nevertheless go unreported because the police and courts are unsympathetic to the rape victim who is chided for being in the wrong place at the wrong time.

I’ve seen the faces of women on the street, going about their chores with a battered face¾as if the system itself was not brutal enough. Alcohol is often to blame. In a country where drunkenness is a cultural right and vodka subsidized by the state, what can you expect? The women are tough survivors. They have to be tough to survive the infamous birthing clinics that treat women like accomplices to a crime. Until recently, there were thirteen abortions for every ten births. Only those with money and contacts can use the modern maternity facilities.

Check here next week for the “winners.”