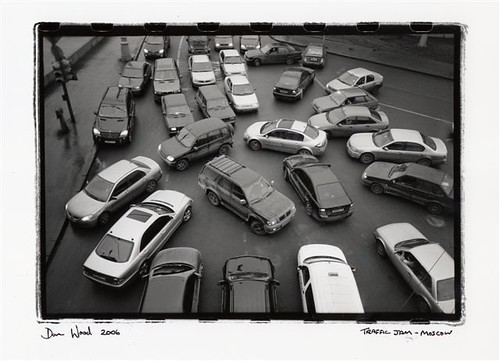 There is a magnetic relationship between Russians and space. The world knows of their historic leadership: Sputnik, Yuri Gagarin, Mir, and their famous rockets. Even the U.S. now uses Russian rockets to launch satellites. There is another observation, an anomaly it seems, about Russians and space—right here on earth. On the streets of Moscow.

I have seen it happen too many times. In the dense traffic that is now normal for Moscow, at a crowded intersection there are six cars squeezed into three lanes at the stoplight: say, four Ladas, a Volga, and a big black Mercedes. There is a hole for one car in the stalled traffic ahead. When the light turns green (or maybe a little before) all six cars rocket for that one hole. Maybe two will make it. The others will keep trying, like hungry puppies after their mother’s breast. From the air it must look like a bunch of killer ants attacking a crumb. Moscow is a city with one of the world’s finest metro systems and is a major city not one made for cars. Under Soviet control, the proletariat did not have cars—that was not the plan.

It happens also in the “produkt” or grocery stores just the same¾or at the gate for an Aeroflot flight. It seems there is a fear the cash register will crash, the cashier will go home, or the plane will leave without them (maybe they know!). Butting in line, elbowing in front of another seems quite natural and little or no offense is taken by the butt-ees. But I do take offense and I usually succeed in sending the butt-or to the end of the line¾that is unless he has cropped hair, is wearing a black turtleneck and suit and smells of sweat or if that person is a determined babushka. Never challenge a babushka. Then I take it all in stride like the rest and pretend not to notice.

I asked a Russian friend, after he had been in California for three weeks, driving the Freeways and city streets, what, in summary or one word, could he describe American life and society. His one word was—discipline. That sort of surprised me. But he is right. We take that for granted here in California. Russians do have a magnetic attraction to space. Maybe that is why the Americans were second. And why the Japanese will never make it with all that bowing.