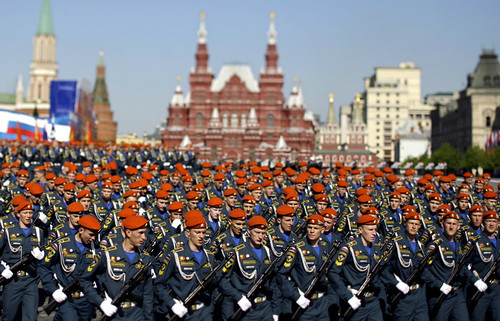 There is nothing like a Russian military parade.  And on May 9, this year, it will happen all over Russia again. As usual, there will be the patriotic bands, goose-stepping soldiers, rockets, missile launchers, freshly painted armored personnel carriers and tanks. Overhead will be low flying jet fighters. You’d think The Great Patriotic War wasn’t over 66 years ago. But, the Russians are proud, and have a right to be, of course.

I remember such a celebration a decade or so ago in Red Square. The orchestra that day was the  National Symphony Orchestra from Washington conducted by the famed Rostropovich and they played, of course, Tchaikovsky’s 1812  Overture. It was a memorable experience. After the Kremlin bells and cannons closing the 1812 Overture, out came costumed historic figures on white horses. It was like a Parade of the Ages  I had seen in Japan once parading all the heroes of the centuries. That took an hour.

The Red Square experience was different however. Out came Alexander Nevsky, fresh from defeating the Teutonic Knights during the Battle of the Ice on 5 April 1242. After that rode General Kutuzov after chasing Napoleon from Russia in 1812. Then that was all. I asked a policeman, “Is that all?” He looked at me with that satirical Russian expression and said, “Nothing of importance has happened since then.”