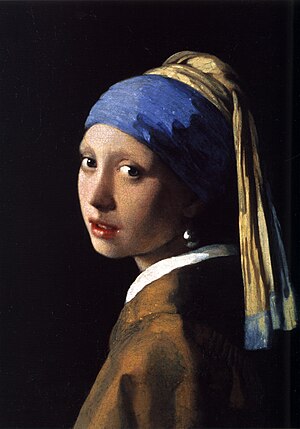 The great painting by Johannes Vermeer, “The Girl with a Pearl Earring” is sometimes called “The Mona Lisa of the North.” I visited it once in The Mauritshuis in The Hague, the Netherlands. That girl’s gaze will rivet the most impatient viewer.

I had read the popular book on this painting, “The Girl with a Pearl Earring” by Tracy Chevalier, and after seeing the painting, I wrote Tracy and told her of my experience. I told her about the man who sat in front of the painting for hours , his eyes glued to those of the girl in Vermeer’s painting.  I assumed the man had read Chevalier ‘s historical novel and for him, like for me, that story became the truth about Vermeer and the girl in the painting. Tracy agreed how, especially in the absence of any pertinent historical facts, the fiction becomes fact, the story.  Tracy Chevalier did a masterful  job. Great movie, too.

Writing a historical novel myself on two Rembrandts, it has been an enjoyable task to separate what is known from what is not known and create a compelling story.  I hope to get this published within the near future.